Whether you call them featured snippets or position zero, they have become the holy grail of SEO since Google released this feature back in 2014. In short, featured snippets are direct, quick answers you’ll see at the very top of a Google search results page. The featured snippet block includes a direct answer to the user’s query. For instance, we searched “What are featured snippets?” and received the following: 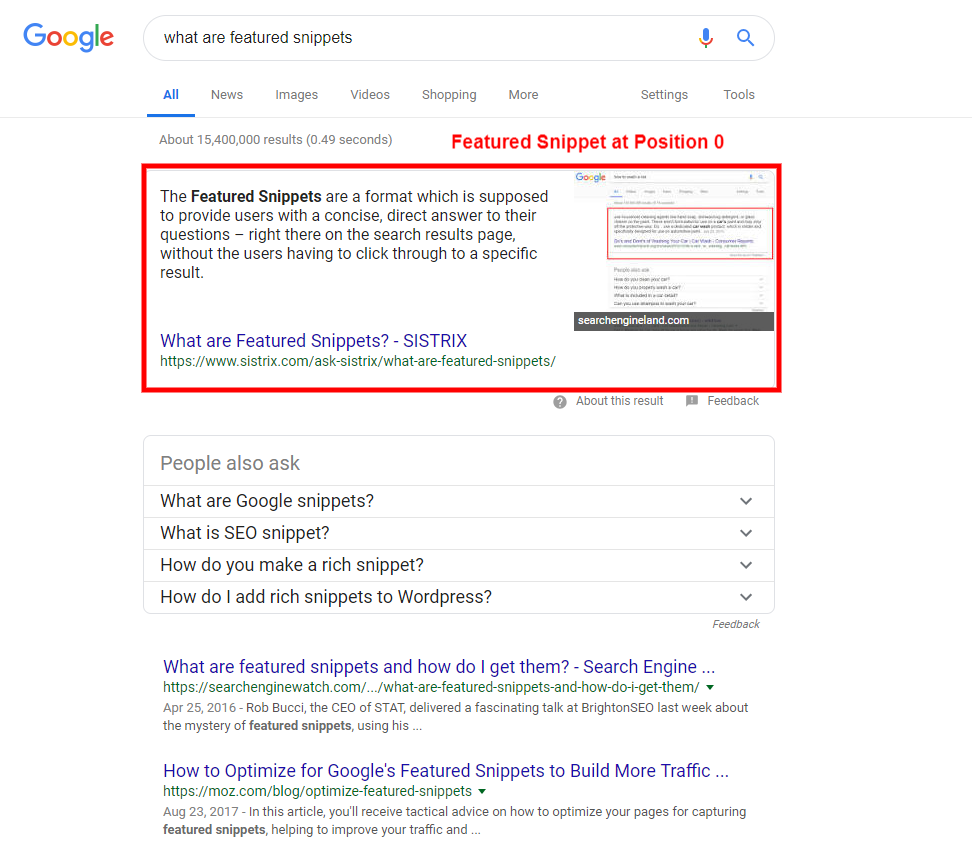 The potential benefits of landing in position 0 on a search engine results page are tremendous. You stand to enjoy more traffic, more SERP visibility, and a significant jolt in the credibility of your brand. Fortunately, you don’t have to be in a top-ranking position to land in position 0.

Getstat reports a stunning 70% of featured snippets are from sites not currently in top-ranking organic positions. Let’s take a closer look at featured snippets and a few suggested ways you can increase your chances of landing in position 0.

What Are the Most Common Types of Featured Snippets?

Featured snippets can come in virtually all sizes and shapes, including:

How Can I Get a Featured Snippet?

Although you can tell Google to not use a page for a featured snippet — by including <meta name=“googlebot“ content=“nosnippet”>  in the page header — there are no official markups that will make Google use your page. This also means you don’t need to have any type of special HTML markups for search engines to feature content from your site in position 0.

If you want to land a featured snippet, it’s vital to keep the section concise and tight. One commonality we’ve noticed throughout most featured snippets is brevity. In addition, you should section off your paragraphs and lists instead of simply letting them run all together.

However, it doesn’t mean your entire article should be a single paragraph. On the contrary, Google has consistently given preference to longer-format content, which is commonly referred to as cornerstone content. This content should be broken into smaller, more digestible subsections with attention-grabbing images.

Even if you do not believe longer-format cornerstone content receives preferential treatment in Google, you can still cover more related questions in a single piece by creating longer, more in-depth content. Here are a few tips that have delivered exceptional results for others:

In the process of formatting your content for featured snippets, it’s critical your break up content using SEO best practices. Make sure you organize your lists, steps, or paragraphs with headers in natural chronological order. You can use H1 headers, H2, H3, and H4 headers to organize your content and communicate the right message.

Keep It Well Organized and Factual

Similar to users, Google simply loves lists, steps, facts and numbers. You’ll see this time and time again, the information presented in featured snippets will be numbered lists, actual ingredients, cooking times, city of birth and birth years, as well as other fact based elements. Make sure to get as factual as possible and always employ numbers, lists, and proper names. Google seems to notice and like certain HTML codes, such as:

Based on data from Ahrefs, once your page gets featured for particular information, it’s much more likely to be featured in other related queries. As a result, you should word your article and structure it in a manner that provides a lot of answers to several similar questions.

Got SEO questions? Don’t hesitate to contact Ready to Run for solutions and answers.

Founded in 2011, Ready to Run Designs is a digital branding and multi-channel content marketing agency based in Poughkeepsie, New York. We develop customized branding strategies as well as integrated platforms for managing online marketing campaigns.